VoxelDesc is a voxel editor driven by a command line, for Java 6 and later, with 2.5D graphics and powerful scripting.

Typical voxel editors would have you place every single voxel by clicking with the mouse, which is slow, repetitive and error-prone. All the tedium of Minecraft with none of the fun! By contrast, VoxelDesc allows you to say things like scene.color(red).from(-2, -2, -2).fill(4, 4, 4). This is not for everyone. But in the right hands, it should enable the creation of sophisticated scenes. See the included manual for details.

VoxelDesc is open source under the Artistic License version 2. You can get the source code on GitHub.

The 1st of November 2014 brings only a minor update: the key modifier for moving the camera is now Alt, because Ctrl was interfering with text selection on the command line. Also, I started filling in the last documentation files.

As of 09 Nov 2014, three GUI features are now available to scripts. You might find these useful for automating batch processing.

In addition, now you move the camera wit Alt and the arrows, instead of Ctrl -- the latter was interfering with text selection on the command line.

As of 23 Oct 2014, there are new operations (recolor and hollow), new and updated documentation and one more sample.

As of 18 Oct 2014, VoxelDesc has mouse support for moving the camera, and actually runs on Java 6 (big oops on my part).

VoxelDesc requires the Java Runtime Environment, version 6 or later. It's installed by default on MacOS X and many Linux distributions. Windows users are also likely to have it already. If not, it's available for free from Oracle.

To run VoxelDesc, just double-click the JAR file. If that doesn't work (and you're certain Java is installed properly on your computer), try opening a command prompt and typing `java -jar voxeldesc.jar' in the directory where you saved it. 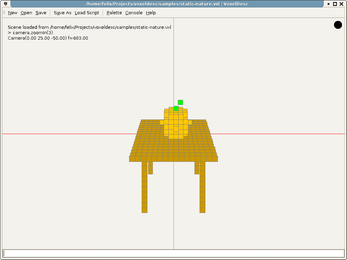 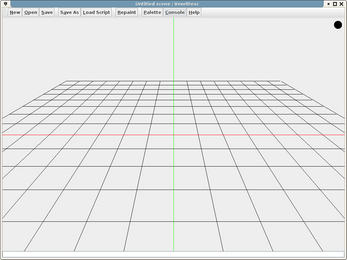 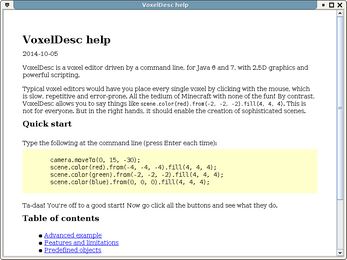