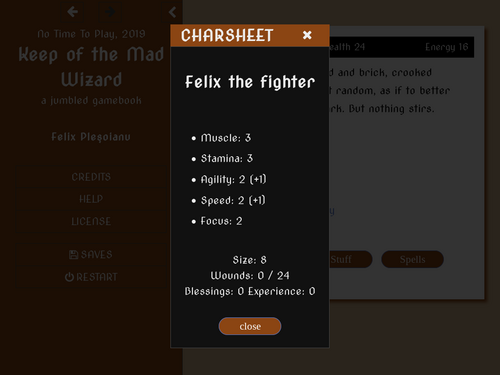 People play games for a variety of reasons. Exploring a virtual world brought to life; taking part in an interactive story; sharpening skills such as reasoning and decision-making; even just exercising memory and/or reflexes. Most games only address one or two of these wants. A few hybrid genres aim for maybe three. As in cooking, the different flavors can do wonders for each other.

Then there are roleplaying games. Right from their birth in the analog realm, they've been the most complex genre out there, that tried to have everything. No doubt due to their ancestry in wargames, on the one hand, and Lord of the Rings on the other: the ultimate tactical simulations, and the ultimate adventure, respectively. It's the key to their enormous appeal. It's also their undoing.

Even the best computer RPGs ever made infamously suffer from a host of problems: bugs; unfinished quests, areas or systems; broken difficulty curves. Even when they work well enough, people complain about pointless battles or other minigames getting in the way of exploration and/or story. It led to one of the biggest controversies in gaming at the end of the 2010s.

All that has just one common cause: complexity bigger than human beings can reasonably handle. Even large teams; you can only help a design process so much by adding more heads. Game, story, world: each is made of countless moving parts. How many balls can you juggle?

To aim for a more focused RPG isn't purism, it's self-preservation.

And so we get to the humble dungeon crawls. I've seen people deny their place under the RPG umbrella because they don't have a story, or much in the way of roleplaying. Which is ironic, seeing how Dungeons&Dragons was born of a dungeon crawl, by Gary Gygax's own admission. It makes sense, too: what's the most iconic locale in the aforementioned LOTR?

If you answered the mines of Moria, you're in good company. That part is even bookended by two of the most memorable lines in the story: "Speak friend and enter", and "Flee, you fools!"

Funny how you can evoke a powerful narrative in under ten words. As for roleplaying, what better way to let players express themselves than giving them the freedom to solve problems their own way?

Typified on the tabletop by The Keep on the Borderlands, an early module for D&D (that's still one of the most influential), dungeon crawls often take a simplified form on the computer, with Diablo and its ancestor Angband pared down to the town, with a single dungeon right below. It's still more than you get in Nethack, that dispenses with the town altogether, much like the original Rogue.

One major exception is Eamon, which expands the tabletop formula to an entire "dungeon planet", inviting the same whimsical mix of genre fiction you can find in early Ultima games. You can tell how well it worked by the fact that the game's last update was fully three decades later, this side of 2010.

For a while I toyed with the idea of making a modern system inspired by it. With or without a command line, with or without graphics in addition to text, but in any event easier to write for. Took me a while, and an abandoned prototype, to realize it wasn't what I wanted. (The prototype paid off anyway.)

Dungeon crawls, you see, aren't about exotic locales or gripping stories. They're resource management games with a side of survival horror. And that means all those carefully crafted maps are little more than blank spaces for random encounters to happen in. Okay, planned encounters too. Same difference. Beat or cheat the big roary thing, steal its baubles, move on. At least in a roguelike I don't have to work my ass off to come up with yet another maze every time. The computer can churn out endless bowls of oatmeal all by itself.

(Not that the focus on combat precludes a meaningful narrative any more than martial arts movies do. But in those, the string of fight scenes is the story, rather than one being just sugar coating for the other.)

What if you could abstract the map even further? As it turns out, there is one classic title that tried to answer this question: Legend of the Red Dragon, a BBS door game. I played a web-based parody, many years after its time, and frankly failed to get the point back then. But the idea stayed with me to this day.

To wit: if dungeons are just places where you can meet a wandering monster now and then, how much do you lose by turning them into menus? Towns are already implemented that way in many games. It arguably lessens the sense of place (though you can still have text and/or pictures, not to mention submenus) but in return you get straight to the point, which is running into unpredictable challenges and figuring out how to face them with the resources you happen to have on hand at the moment.

Even better, you can offer players a lot more variety in how to deal with each kind of challenge when it's so much cheaper to implement any given option. And you know what else a menu-based interface ensures?

Your game is now highly accessible, and can be implemented with popular open source tools like Twine or Ren'Py. Hard to beat them for rapid prototyping and ease of development, really.

Sure, that makes for monotonous gameplay. But here's a tip: people secretly like grind. Simple, repetitive activities can be relaxing. And you can always add more stuff once you have the basics in place.

Yes, yes, I know. It's not your thing. You want to make an RPG with a nice big world to explore and an epic storyline where you save that world. But then, maybe go with game mechanics that emphasize finding clues, making allies and gathering strength, instead of having players whack giant rats with a pointy stick.

Get Keep of the Mad Wizard

Keep of the Mad Wizard